Creative Response To The Uncertainty Paradox 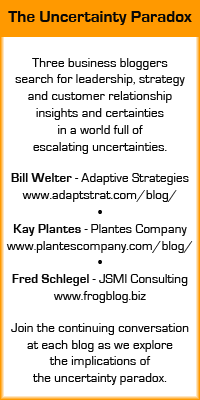 Newsweek’s declaration that the recession is over and long lines at auto dealers seems to have upped feelings of angst in many circles. Reactions from ‘yeah sure’ to ‘How did I miss it’ to ‘yipee,’ indicate that maybe not everyone is on the same page. Which really shouldn’t be a surprise given folks disagree on the state of the economy when times are good or bad. So what do you do when you don’t know, can’t know? I wanted to pull together a few pieces of conversation both directly and indirectly related to the Uncertainty Paradox that struck a chord for me over the past week or so.

A big issue when you’re stuck in a period of extreme uncertainty is how to take the next step forward. Kay Plantes in dealing with business model innovation brought up Tide’s experiment with Tide Basic, a product introduction with a reduced feature set and reduced price. Kay asks is that the right direction for a premium brand to go. For example Kay writes:

“It takes only one other equivalent competitor to be a commodity. When benefits are perceived as similar, price drives decisions. If you’re not lowest cost, become benefit differentiated.”

“Price is not the endgame. Rather, consumer purchase decisions are based on value, which is the difference between perceived benefits and costs to acquire these benefits in the consumers’ mind.”

We’re outside trying to guess what the folks at P&G might be thinking, but (as I commented) the strategy brings up the sometimes inherent conflict between strategies such as “market share leader” and “highest quality product.”

I don’t know what the right answer here is for P&G, but the interesting thing is the EXPERIMENT. Given a change in attitude may be temporary or may be permanent (can take time to figure out which) you sometimes have to prepare for shifts that may fundamentally alter your strategy. Testing the impact of a low end brand extension might be the only way to know what it will do to your brand image. Being willing to kill that experiment if it doesn’t fit with your strategic vision is a leadership test.

Where can we find role models for such preparation? Bill Welter’s post at Adaptive Strategies on how the explorer Rould Amundsen dealt with the uncertain conditions of his quest to the South Pole fits here:

“So he focused on some things that remained true and important no matter what – weight and warmth. For example, while waiting for the “good” weather he spent time shaving down the sleds and wooden boxes to get them as light as possible.”

As much as I would like to say otherwise, price is always an issue that has to be balanced against the intrinsic value of your product. (You’re seldom going to find ways to save money that are a waist of time.) Sometimes it’s good to test the waters and see if the features you worked so hard on are really anything folks care about. In Tide’s case you could ask the question, can consumers differentiate between laundry that needs high end detergent vs basic?  “What do I see for that extra 20%?”

Having diversity in thought and deed within your organization is an important element in avoiding hubris. Especially in times of uncertainty when your own voice can drown out other signals that could guide your companies way. Jim Stoop of Managing Leadership wrote in a recent post:

“The important and valuable forms of diversity needed by a business – and often most vigorously and successfully resisted – are those related to differences in personality, values, artistic or intellectual inclinations, trained skills, native ability, and even character traits such as energy, attentiveness, insularity or gregariousness.”

I think creative spirits in large organizations can relate to these thoughts. In pursuit of getting things done managers have a tendency to simplify and streamline. This is powerful stuff, but it can also steamroll over attitudes and creative thoughts that can offer important guidance. Group think can explain odd comments like ‘They didn’t have the right to exist in the Gatorade world’ or any thought that berates customers for just not getting it.

Sometimes we just need to turn our thinking upside down. Customers change. Tastes change. No mater what creative endeavor you are part of, the more rules for success are written in stone the more opportunity is knocking for the potential leader who can see things a different way. Artists and  creative spirits know this intrinsically. It’s a thought process that comes naturally. If you don’t see this natural conflict between thought processes occurring in your organization, it could very well be a warning sign. Every business contains creative spirits – and there’s a good chance they might not be carrying around a paintbrush. The trick is to tap into that energy, that alternate thought process and harness it to strengthen the overall thinking of your organization.

The discussion of the Free paradigm is interesting to watch from this perspective. You have ‘true believers’ in the idea that all things digital will work towards free. An ‘old guard’ trying to deal with the fact that significant revenue streams have been filtered off or destroyed by technology. And many perspectives in-between. Taylor Davidson at Unstructured Ventures makes the argument that “Free isn’t a problem, Free is an opportunity,” which is the reverse of what many photographers and digitized managers are probably thinking. The discussion brought up my comment:

“To a certain extent it is the responsibility of the old guard to defend apparently outdated business tactics and milk them for cash flow. That’s why so often when there is a tech revolution only a few old guard players survive the transition.”

Are you milking a business model or building a new business?

There isn’t necessarily one right answer. The issue is making a decision and then optimizing towards that goal. Right and wrong is seldom decided during ideation. It is typically decided in bankruptcy court. On the other side of the Free debate coin, Mark Cuban is continuing and strengthening the debate that charging for content can work. (A proposition that Newscorp intends to test next year.)

Once again you see the tension between marketshare, profitshare and quality driving different opinions of how to drive business success. In times of uncertainty, sometimes fundamental questions can only be answered by making decisions, experimenting and seeing what works.

The Uncertainty Paradox Three business bloggers search for leadership, strategy and customer relationship insights and certainties in a world full of escalating uncertainties.

Join the continuing conversation at each of our blogs as we explore the implications of the uncertainty paradox.

10 Responses to Creative Response To The Uncertainty Paradox

This site uses Akismet to reduce spam. Learn how your comment data is processed.